The Loss of an Icon

Like many of you, we were deeply saddened by the loss of a true American original, Arnold Palmer. He was an inspiration to many, including our original owners - Joe Tortorice Jr. and Rusty Coco. They were business partners and avid golfers as well as cousins who grew up watching  “The King”  burst onto the scene in the 1950s popularizing golf on TV. Their fathers, “Big Joe” Tortorice Sr. and V.J. Coco, avid golfers themselves, pointed Arnie out to Joe and Rusty as a role model, admired and connected with his “everyman” mannerisms, his authenticity and unconventional processes. They were working class folks who loved the game just like Arnie. He turned the golf world upside down and never lost sight of who he was and the value he created for his fans. He always put on a show, performed at his best and always made time to sign autographs and shake hands. He once said, “When people ask me what has driven me all of these years, I give them the same answer. It’s YOU.”

The value of Servant Leadership was a tremendous inspiration for Joe Jr. I asked Joe to explain how he was introduced to and inspired by Arnold Palmer.

“When I was 10 years old, my godfather, Uncle Vic, introduced me to the great game of golf. He showed up at our home one day with a gift -  a brand new driver. The year was 1958, and golf was introduced to the world via a brand new medium , television!  Although golf has been around for several hundred years, it had never become a big deal until a young, charismatic, slashing and dashing star came along. His name was Arnold Palmer! Not only was he the best in the world, but he had a wonderful way with people. He always made time for his fans.

My father and uncle were brothers and golf buddies. They soon became passionate fans of Arnold. Although neither ever met him in person, they dearly loved all that he stood for. Throughout my life, I followed this great golfer and man. I learned that his fame and fortune were secondary to kindness and respect for all people. I even learned some little special things that his dad taught him: Always remove your hat indoors and sign your name legibly!

As my father, affectionately known as Big Joe, approached his 90th birthday, his health began to deteriorate. At that time, I wrote Mr. Palmer and asked him for a favor. One week later, I received a beautiful color photograph of him. On it, he wrote a note to my father: ‘To Joe, Happy 90th! Arnold Palmer.’ This gesture of love and compassion by a worldwide celebrity brightened the last days of my father's life. This autographed picture remains, even today, one of my most cherished keepsakes.” 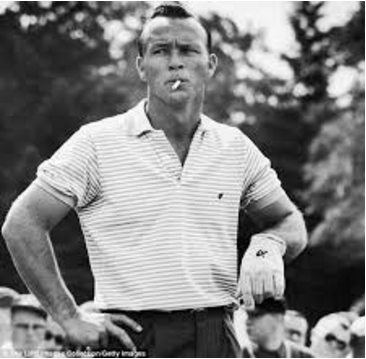 Rusty (Uncle Vic’s son) always had this image proudly hanging in his office. His style, confidence and intensity says it all. He was a Rock Star among former Boy Band lead singers (Hogan, Nicklaus, Player being exceptions of course). Not to imply that his competitors were not great players in their own rights; they just didn’t have his charisma, sense of self and blue collar approach. He stood out from the crowd. His commitment to his craft was unprecedented, hitting balls for hours, long after his competition went home, demanding the best of himself.

It was that drive and passion that made the battles waged between himself, Player and Nicklaus so much fun. When asked why he revered that picture so much, Rusty said, “Arnie was a hero because of his style, class, a bit of bravado and confidence. He had raw talent and was his own man but knew how to channel all those attributes into class act. He gave a tremendous amount of his energy to the game off the course. A real dude.”

I truly believe that spirit came through in the decisions that have made our Brand what it is today and why you, our fans, respect us.  We are certainly unconventional, introducing “Fast Casual” to Texas 40 years ago and evolving our concept to include healthy offerings like a Salad Bar, organic and wild-caught ingredients, catering, delivery, special dietary menus, etc. Like those that followed Arnie, we see competitors imitating and emulating us. We eliminated ingredients like processed trans fats, processed MSG, artificial colors, HFCS long before it was the “cool” thing to do.

Like the work Mr. Palmer did with his charitable organization Arnie’s Army, we too felt compelled to use the power of our Brand to change the lives of others and work to eliminate Cancer from the lives of our families, friends, co-workers and customers.

Finally, we never lost touch with our fans.  Everything we do is done with one goal in mind, “leave value on the plate for our customers!” We hope everyone can enjoy our food and feel good about what he/ she is feeding themselves and his/her families. Freebies like ice cream and muffins, customized portions of high quality food, All you can eat Salad Bar with many organics for a price much less than you would pay for the same offering at other SB concepts. This is always top of mind because we do not want to position ourselves as a restaurant targeting only a certain clientele. We are healthy to indulgent and always have been.

So, we remove our caps on the 18th green to pay respect and homage to a great man and human being. We mix a glass of Tea and Lemonade, raise it up and recognize the impact this icon and role model had on us and say, “Thank you Mr. Palmer, for all you have done.  You left an indelible mark on your sport, your community and us.”

Back to Deli Blogs