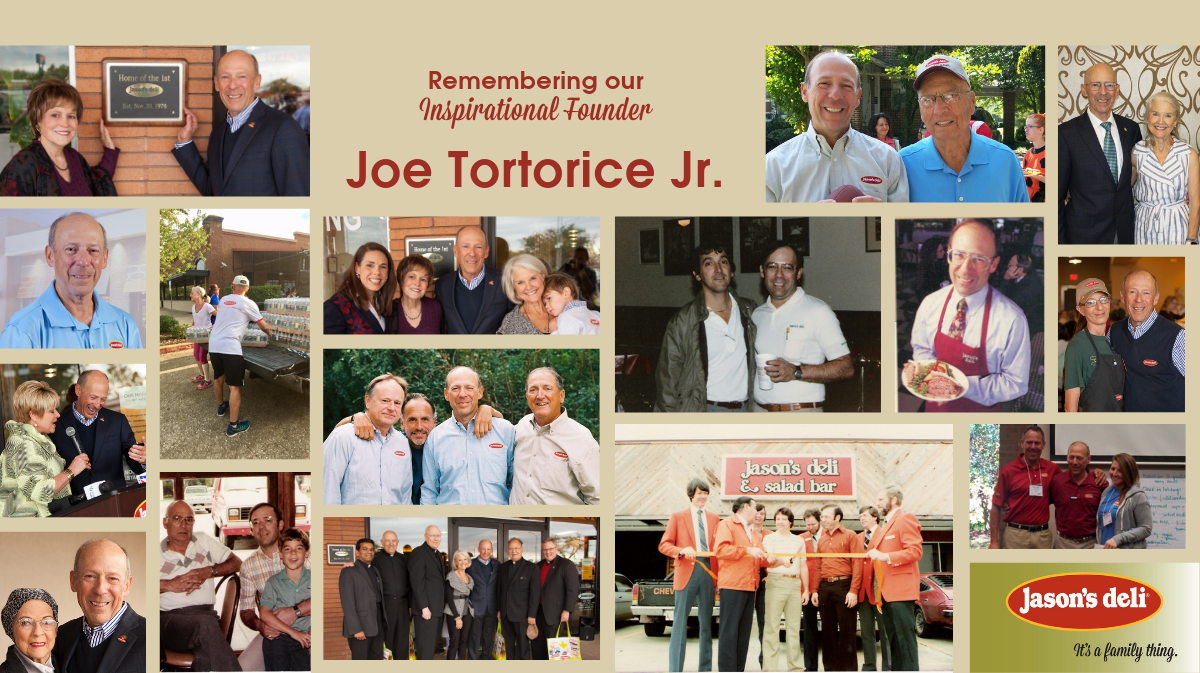 Our inspirational founder and chairman of the board, Joe Tortorice Jr., passed away this morning at the age of 70. He is survived by his mother Margaret, his wife of 48 years, Shelley, their three children and nine grandchildren. Tortorice was best known for his kindness, empathy and humility - a testament to the way he lived his life as a servant leader and his dedication to improving the lives of others.

Tortorice believed above all else that a strong company culture built among its employees and supported through servant leadership, translates into a better experience for the customer. According to him, that culture is the way people treat each other; the warmth, compassion, and love inside a company. He understood that “humbly serving others today and putting their needs before your own will make you a better leader tomorrow.” He continually “took accountability for the well being of others” in both his personal and professional life.

The grandson of Italian immigrants, Tortorice grew up with food service as a key part of his life. His father, Joe Tortorice Sr., invested in four grocery stores, two laundromats, two dry cleaners and a little sandwich shop, J's BBQ and Washateria, which would inspire Tortorice to open his own restaurant - Jason’s Deli. Tortorice talked about how he learned empathy from his dad and humility from his grandfather who gave up his own retirement to help him in the deli.

From that single location founded in 1976 in Beaumont, TX, Jason’s Deli has grown into a leading, fast casual restaurant chain with 294 locations across 28 states and employing more than 12,000 people.

Eldest son Jay, who inspired the company’s name (Jay + Son = Jason’s), said he'll remember his father most for being “a dedicated family man, business mentor and inspiration to all who knew him.”

Tortorice was actively involved with the day-to-day operations of the company and in his position as Chairman of the Board of Deli Management Inc., the parent company of Jason’s Deli. He continued to visit delis, attend manager workshops and spoke at numerous colleges and universities.

Joseph Tortorice received his Bachelor’s Degree in Marketing from Texas A&M and his Master’s Degree in Business Administration from Lamar University. As a cadet, Tortorice was the Commanding Officer of First Group Staff, a member of Squadron-1, the Ross Volunteers and was active in Town Hall and the American Marketing Association.

Tortorice served two years as an officer in the U.S. Air Force prior to moving to the private sector. While working full-time as an accountant, Tortorice founded Jason’s Deli, opening his first location in Beaumont, Texas in 1976. A true family business, he and his family worked lunches, nights and weekends to develop the business into a successful venture. Three years later, Jason’s Deli became a restaurant chain as Tortorice opened two additional delis in nearby communities.

In 2005, Jason’s Deli was one of the first national restaurant chains to remove partially hydrogenated oils from their food and preparation processes. Still a family enterprise, Tortorice’s three children are all involved in the company’s operations. His oldest son, Jay, continued the family tradition and became the company’s largest franchisee with 21 locations across the country.

Tortorice received recognition for his service to the community and business leadership awards throughout his life:

● Executive of the Year, Sales and Marketing Club of Southeast Texas - 1999